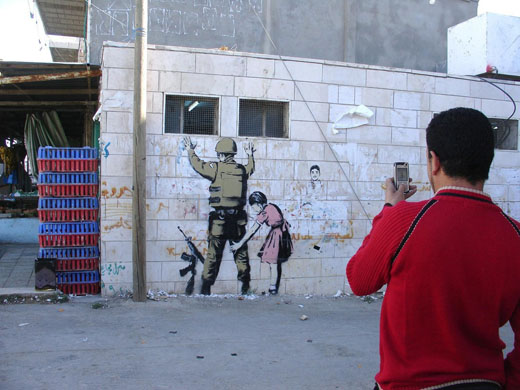 One exhibition we won't be seeing this week in Miami during Art Basel features artwork by one of street arts' leading figures, Banksy.

The fact that Banksy himself has nothing to do with an exhibition that has his name on it, tells you a lot about the reason why not only we won't be attending, but why you shouldn't either.

One of the things that we love most about street art, and something that became the backbone of our book TRESPASS and our talks at places like the TATE Modern and MOMA, is that street art is at its best when it's site specific.  What this means is that the piece only "works" in the specific location that it is placed. The collaboration that the artist has with the specific environment is what makes it "art". Without this context it has very little meaning and value.

A true steet artist walks by a wall or a building, and in his or her mind sees that wall or building differently than you and I. They see it with a spark of an idea. Internally they are saying "How fucking cool would it be if I put this specific image in the context of that specific building?"  The artist then goes back to their studio and cuts a specific stencil or prints a wheatpaste that could only "work" in that one location. The artist then risks arrest and considerable fines to make sure that all of us have the pleasure of seeing the work as we explore the locations where we live.

Street art is meant to be stumbled upon and discovered.

It's not meant to be found on a tourist map.

And this is why we never publish the exact locations of the work with celebrate.

One needs to spend only 30 seconds on Banksy's website to know that Banksy's true brilliance, and his true passion, is that his work outside is extremely site specific. Even if it's done with a marker, the piece could only work in that one location. So while there are indeed close-ups on Banksy's site of the pieces that he has done, he always includes the "long shot."  Its only then that you truly smile and appreciate what Banksy has done.

When we first heard that somebody was going around the world cutting out site specific pieces of art that Banksy had made in iconic locations around the world, we weren't surprised. Banksy's work is now selling for incredible amounts of money and unfortunately there are people out there that believe that if they can steal the work, it's theirs to do what they want with it. Including trying to con someone into buying it.

Banksy wisely got hip to this form of profiteering and set up Pest Control, an authentication service that smartly refuses to authenticate any work taken from the street.

It's intentional on our part that this article doesn't mention the name of the show that will take place this week in Miami. Nor will we mention the name of the speculator who is crassly attempting to profit from the work. Attention is what he desires. If you get enough attention (even if the majority of that attention is negative) sooner or later you will find a sucker who will pay you money. Maybe not for a wall, but for something else that they have that you might want.

The walls themselves are only a ruse.

But we will call out the Miami Art Fair. Knowing that Banksy has condemned the show, they could have easily rejected the exhibition and not legitimized the stolen artwork. But they didn't. And this tells you a lot about what their motivations are.

Six years ago we took a very public stand against vandalism caused by "The Splasher" who at the time was systematically destroying iconic street art pieces around New York.  Our anger was that the Splasher was destroying work that was humanizing New York and making it a better place to live. But back then nobody was going around stealing street works by artists like Shepard Fairey, Faile, and Banksy.

Today, if we had to choose between the Splasher who destoys street work, and the gallerist who "preserves" it, we'd support the Splasher 100%.

As we told the Miami Herald last night, the real crime is that showing these pieces at an art fair ultimately legitimizes the removal of ALL street art and this will eventually lead to the downfall of the street art movement that we, and all of you, helped build.